The story of us

Boat, restaurant and hotel - three words that describe more than 50 years of history of Hotel Terra and the Palčić family. 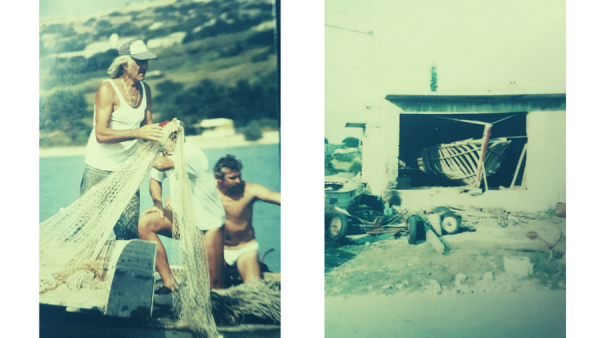 Long before it became what it is today, a world-famous holiday destination and an unforgettable music festival experience, Novalja was a small island town with a long tradition of fishing and agriculture. Tourism was an unknown word, summer and beaches were exclusive for the locals, and fishing boats and vineyards were the pillars that built and developed the community.

Our family lived and grew in that harmony, but always had the vision to create something more. The story began with a boat workshop opened on the location of today's Hotel Terra by our grandfather Stjepan also known as Ungar. Cheerful by nature, but serious and diligent in his work, our grandfather became one of the best and most famous shipbuilders, and the news of the skillful handyman from Novalja quickly spread among fishermen. He himself was a fisherman, a passionate huntsman, a family man, and a great friend. He told stories about cold fishing nights at sea and exciting hunting trips to Italy with passion and love, during breaks from building boats. In this workshop, his hands were his main tool, and his stories an inspiration for every visitor.

Over the years, the story, which began with grandpa Stjepan and his workshop, got a new vision. It was time to turn a new page and start a new chapter. Our grandfather left his workspace to his children and decided to dedicate his remaining time to himself and his family. After some time, Restaurant Busola (compass) opened the doors to both locals and foreign guests directly on the location of grandfathers workshop, where the tradition of hard works and meticulousness was nurtured. The restaurant was opened in 1989, and over the next 10 years, it became known as the first and the best choice for tasting Pag lamb as a local specialty.

Precisely because of the menu filled with local specialties, the restaurant gained a great reputation among the local population, but it also became one of the first choices of an increasing number of guests who visited Novalja every year. Located in an attractive and busy location, the tables were booked every day and the highlight was that guests could watch the meat (lamb) being prepared and baked right next to the restaurant. A detail that was extremely attractive to everyone, especially to foreign tourists who did not know about such food preparation. Thus, the tradition of success started by grandfather Stjepan continued with his children who had their own idea and vision of success, set on a family tradition and values. The values they soon upgraded with another successful idea.

Novalja has slowly grown from a small fishing village to an increasingly popular tourist destination. Families enjoyed the beautiful beaches and scenery, while young people enjoyed the music and clubs on Zrce beach. Our Palčić family has decided on the next big undertaking, building a family hotel that will provide its visitors with a high level of service, but with a warm family approach that we have provided through the decades and all our adventures. After several years of construction and investment, Hotel Terra opened its doors in 2009. The excitement among the family members was great, however, the work of the whole family and the effort that each of us put in was rewarded very quickly. One of the reasons for another success may be the family tradition and the story that is embedded in the roots of the hotel.

Hotel Terra was named after the fields and land that the noble Palčić family inherited from their ancestors, and the colors and theme of the hotel represent earth tones for this very reason. We paid special attention to the family tradition and a story we are all very proud of. This story is told to all our visitors who can enjoy the gastronomic offer of authentic dishes in the hotel restaurant and the pleasant atmosphere which is a defining characteristic of our friendly hotel staff. It gives everyone a unique opportunity to immerse themselves in the warm family history and long-lasting adventure.

An adventure that continues. With new challenges, ideas, and stories, which are now being told by new generations of the Palčić family. A generation that looks ahead and bravely walks the paved road following in the footsteps of those whose emotions they continue to pass on to others.

Visit us ... and become a part of our story.

Please do not hesitate to contact us whenever you have a question!

You have questions related to a specific offer? Contact us with confidence. We will find the best solution for you.
Contact Us