The Island of Pag

The island of Pag is one of the biggest Adriatic islands: it is the fifth largest island with 284.50 square kilometers. Its 270 kilometers of the indented coastline make it the island with the longest coastline on the Adriatic, rich with coves, bays, beaches and capes.

The biggest bay, the bay of Pag, is rounded by 20 km of the gravel beaches. Pag is unique due to its vegetation where trees are the most rare form. Therefore, Pag is the largest kingdom of rocky ground on the Adriatic, where thin grass, low aromatic herb cover, sage and immortelle grow. They make the foundation of the nourishment of the island’s sheep on the rocky ground, intersected by long dry stonewalls, giving a special flavor to the well known cheese of Pag. The gastronomy of the island offers first class sheep cheese and lamb, as well as various seafood specialties.

Novalja has a long, vivid and interesting history, evidence of which you can find in numerous archaeological locations in the town and its surroundings. Three early Christian basilicas from the 4th and 5th century take a special place among them and you can see the remains of a floor mosaic of one of them inside the gothic church of Our Lady of Rosemary in the town centre.

Many pieces of church furniture and other items are preserved in the archaeological collection of Stomorica. Reliquary, found near one of the basilicas, is of great value and you can see it in the Archaeological museum in Zadar. Novalja is also a place where one of the oldest illustrations of Our Lady was found with the inscription: Maria on the east Adriatic coast.

From the archaeological aspect the area around Caska is very interesting and lately researches of the Roman settlement Cissa have been intensified. According to a legend, this settlement was destroyed in the 4th century earthquake.

The greatest value and curiosity represents a simple antique water supply system from the 1st century, chiseled from live stone and about 1.2 km long, 70 cm wide and 40 m high with 9 overhead openings. That unique roman aqueduct, popularly called Talian’s hole, supplied Novalja with water from Navalja’s fields. Entrance in the water supply system is inside of the Town museum which also preserves a part of Navalja’s cultural and ethnological heritage.

From the treasury of folk treasure we single out a domestic dance- naški, which is performed in colorful folk costumes to the bellows music.

People also treasure the traditional folk singing in two voices- nakanat, which is also performed at a festival. Harmony- singing groups Navalia (men’s group) and Murtulice (women’s group) cherish the original Dalmatian harmony- singing tradition. Liturgical singing is also of great importance, whose richness comes to its fullest at religious ceremonies of the Holly Week (from Palm Sunday to Easter).

There aren’t many places at the Adriatic that have so many beautiful natural beaches in their surroundings. Whether you choose to go north or south, east or west from Novalja you are bound to reach one of these magnificent beaches which will give you so much pleasure. Sand or pebble beaches are wide, sea is clean and easily accessible so they are the best solution for families with children. They are one to three kilometers away from Novalja and they make a kind of a ring around it. You can reach all of them by car except the beach Babe, and they all have parking lots. 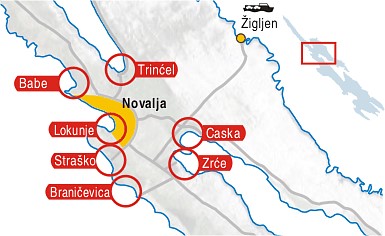 Beach Zrće is situated south- east from Novalja and there is a special story about it. It is the most beautiful and the most attractive Novalja beach. Its costal part is a spacious pebbly surface which can fit several thousands of tourists during the season peak. Sea entrance is also pebbly and due to its steep sea bottom the beach is very deep. There are many sports- recreational as well as entertainment contents at the beach along with an excellent catering service. Attractively decorated venues provide you a night long entertainment.

Thanks to the strivings of the Croatian tourist community and the “Plavi cvijet” (blue flower) media, beach Zrće was pronounced the most beautiful and the best set beach in the Adriatic for the year 2002. With its exquisite natural beauties, capacities and contents beach Zrće satisfies all strict criteria of the European trust for environment education, so that since the summer 2003 it also has the blue flag. The beach is two kilometers away from Novalja and it has a big parking lot. During July and August there is also a public transport that connects Novalja with the beach.

The beauty of Novalja surroundings is not only in its amazing and picturesque landscapes but also in vivid places in its surroundings. Their differences give this whole area an additional charm and image of the exquisite diversity of the island.

Under the branches of hundred- year old olives in the far north- west of the island you will find Lun. Nature left the mark of its generosity in a unique combination of green and dark blue. Mild Mediterranean climate and reinforcing peace and quiet of the Lun olive gardens will renew your exhausted strengths. In such quiet you will feel like time stopped.

Lun olive gardens represent a true oasis of peace and one of the most picturesque and most beautiful corners of our island. Amongst countless olive trees, over 1500 wild olive trees take special place- olea oleaster. They are from five to eight meters high and twenty to eighty cm in diameter wide. This wild olive area, with its 24 ha surface is unique in the Adriatic and it has great botanical value. Due to its features it is protected and was pronounced a botanical reserve in 1963.

North of Novalja, in a warm deeply indented bay Stara Novalja hides its beauties. Planjka (Trinćel) beach stretches on the south- east end of the bay and presents one of the naturally most beautiful and best decorated domestic beaches, where you can have lot of fun and refreshment during hot summer days. You will experience evening refreshment in walks along a long, beautifully decorated seaside promenade.

There are several diving clubs in Stara Novalja so we can freely say that divers open and close the tourist season.

Gajac is a tourist- residential place 2 km away from Novalja. A long sand Braničevica beach stretches along the coast and it is oriented towards the open sea. During summer Gajac is connected to Novalja by public transportation

Pag is the town of the sea salt. The importance of the salt was the main reason that Pag was constructed in the 15th century, according to a plan and as a fortified town. The original salt manufacture by draining of the sea, which is brought in the small clay pools (saline), is still present on the island. These salt pools are not only an authentic relict of the past but also an interesting photographic motif.

The town of Pag is also the town of needlework- the famous lace. Every lace is a unique item. The slow and demanding process of making them has been nourished through centuries and still lives in the streets of the old town. 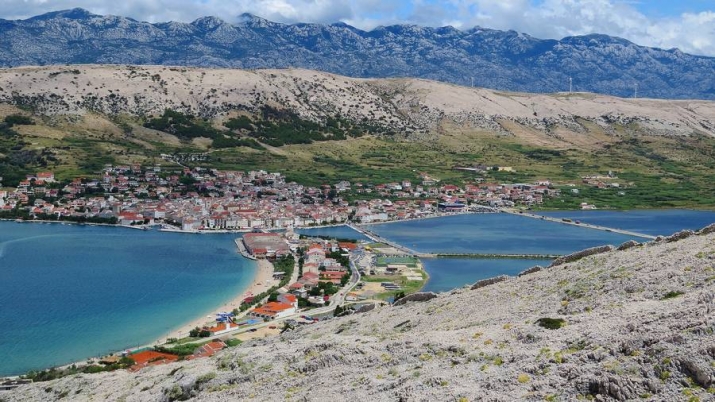 The most interesting cultural and historical place on the island – the town of Pag – is not the oldest place on the island as well. One kilometer to the south, there are the remains of a settlement (a fortified convent and a church) which preceded today’s Pag – the Old town of Pag which the king Bela IV granted the status of the Royal Borough, on 30th March 1244. In 1443, the construction of the new town started according to the strict designs of Juraj Dalmatinac, Renaissance sculptor and architect. It ended two centuries later. There is the parish Church of the Assumption on the main town’s square. This church is a valuable cultural and art monument because of its exterior and interior architectural solutions, as well as the exhibits. The town abounds in beautifully carved doorposts on the entrances of the noblemen’s houses and yards, small baroque balconies, stone coats of arms from the period 15th - 18th century and a magnificent portal on the Duke’s palace.

This well-preserved mediaeval town, whose center is the cultural monument, even today performs the function of the administrative, cultural and mercantile center. The Benedictine convent of St. Margarita, besides numerous valuable sacral relics and pictures, cherishes also the tradition of making “baškotini”, the aromatic crunchy biscuits that are offered at the entrance of the convent.

The bay of Pag is rounded by 20 km of the gravel and sandy beaches. Beside 5 hotels, the town offers trendily equipped capacities in private accommodation. During the summer season, the winter (in February) and summer (at the end of July) carnivals, there is a rich cultural and entertainment program. “Pag’s Slave girl”(a kind of a “miracle play”), folklore, the carnival wheel dance (so called “kolo”) accompanied by the brass band, old folk costumes, old songs and dances with “mišnjice”, (a kind of an instrument) are the distinguished parts of the centuries-long traditio.

Please do not hesitate to contact us whenever you have a question!

You have questions related to a specific offer? Contact us with confidence. We will find the best solution for you.
Contact Us